The City of Cape Town have recently published amendments to the Planning and Building Development bye law. This is the bye law that incorporates the zoning scheme, which stipulates the limitations on development of land.

There is a bunch of dry stuff in this revision to do with definitions and technical detail, but the stand out amendment for me,  is to do with requirements for a second dwelling  on a single residential plot.

A second dwelling is a self contained unit, often referred to as a granny flat, built on your single residential property.
In the past, this has always required a departure from the zoning scheme regulations, neighbour consents, and delays in the approval process,  as your ordinary home type plot is zoned single residential, ie for a single residence. ( Duh ! )

The amendment now allows a second dwelling, a self contained flatlet, on a single residential plot without departure approval, as long as it complies with all other requirements, building lines for instance, or a conventional building system. 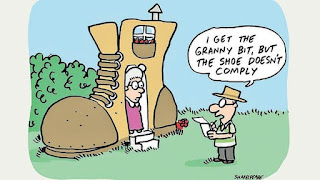 In fact, the amendment also makes provision for a 3rd dwelling, but this is subject to you being in an area where there is a 3rd dwelling overlay zone, and this hasn't been written or specified yet. It is likely to be provided for in areas where the city wants to implement the densification policy, perhaps in built up areas with limited land available, we shall see.

This change allowing second dwellings as a matter of right, as mentioned, is subject to compliance with all other requirements.
It may be, that some areas which fall under master home owners associations, Parklands, Sunningdale, Big Bay etc, may have conditions of approval or rules which don't allow this, check with your HOA or Body Corporate to see what applies if you in an area such as this.

Lastly, as ever, the city's zoning scheme cannot over ride a title deed conditions. Some older properties may have a condition limiting use to a single dwelling, and to proceed with a second dwelling in this case would first require removal of the title deed condition - which can be a long and expensive process.

Overall good news for those who want to move Mom in with them, but still give a level of independence - don't have to hide it as a maids quarters anymore. 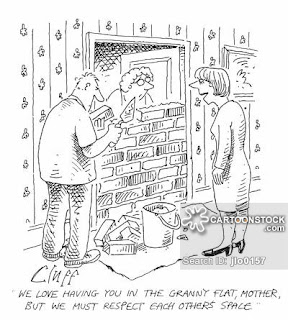 Having said that, a maids quarters of not more than 50 m2 can be classified as an outbuilding and, within certain limits, be allowed to be built over the site building lines. ( Common boundaries, not street - height limit 3.5m max)
Posted by Dave H - The Plan Specialist at 4:55 AM 2 comments:

Had plans approved, building work done, so you are all legal and official ?
Maybe not !

A plan once approved is valid for a start within 1 year of the date of approval.
Still all good ? Probably, but, did you advise the building inspector when you started ?

If you do not notify the building inspector, it is possible that after 1 year the plan will lapse. Bingo. All of a sudden your building work is unauthorised.

Look, the BI's generally are reasonable people, and would probably try and get hold of you by phone to ask if this work was done, but if they can't get hold of you for whatever reason, the plan can lapse.

UPDATE - with the miracles of the city of cape towns electronic plans management system, it is now likely that your plan will " lapsed ": after the 12 month period BY THEIR COMPUTER, and not your friendly BI.

Doesn't matter what the work proposed is, the BI may not even come out to inspect your little covered patio, but he needs to be notified so he can close the file.

Last thing is - if it has a roof, any excavation, or a foundation, it requires  a plan. Your louvre awning is a roof. A swimming pool has lots of rules and needs an approved plan. Your little thatched gazebo - fire regulations. Boundary walls, - the City has a walling policy that needs to be complied with. Get the plan drawn and approved before starting work, and call the Building Inspector when you do.

Due to the wonders of the interweb, these posts crop up all over the world, be aware that we practice in the City of Cape Town in South Africa, and the information shared relates to out experience of the local requirements. Wherever in the world you are, check with your local authority, or a locally experienced architectural professional.

Posted by Dave H - The Plan Specialist at 7:09 AM No comments:

Get your plans approved BEFORE you build !!!

Duh !
Seems obvious doesn't it, but you would be surprised how many structures are built without approved plans.
One step further, if you make changes during construction, make sure an amended plan is approved.

I visited a clients home today, they have sold and it appeared that there where some issues with what had been built compared to what the approved plans show. 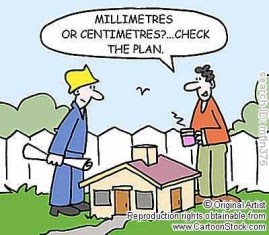 A 2 level home on a sloping plot, it's double storey to the street, but single storey at the back. Garaging, entrance and some staff quarters are on the lower level at the front, the main house on one level above. The plot slopes upward from the street to the rear.

A plan had been approved for additional garaging, quite large, at the lower level, and an additional living room above, with a large outdoor entertainment deck and pool.

What was built was two living rooms on the upper floor, extending  much further into the deck, with a smaller entertainment deck - more a balcony. The roof had been extended right over the balcony where before the entertainment deck was not roofed.

This was built ten years ago, and in that time, the national building regulations have been re written, a new regulation dealing with energy efficiency and insulation has been introduced, and the local authority has updated its zoning scheme regulations changing all the building line parameters.

A building line is an imaginary line, inset a certain distance inside the plot boundaries, over which you shouldn't build. In Cape Town, this varies according to the plot size.

In order to submit a plan to correct this now, the plan must comply with the regulations in place now. 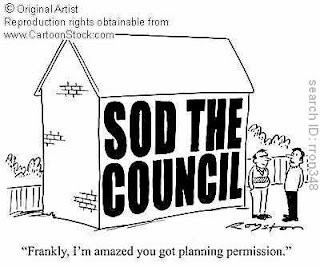 The building line setback from the boundaries has increased in the new zoning scheme, so the structure as built is over the building line. To make things worse, historic building line restrictions are entrenched in the title deed, it's quite an old property, and the structure is in fact over these as well. So both a departure from the zoning scheme will be required to be approved, as well as a waiver of the title deed restriction.
Both of these will require consent of neighbours in a 360 degree circle around the house, approval of the variance, and can take 2 - 3 months in the process at least.
As in anything which requires permission to depart from a regulation, it is implied that this can be declined, otherwise, what's the point of the regulation!

This has come up now because the owner has sold, and with good advice from his estate agent, a sensible purchaser wants to see confirmation the house as built is properly approved. The fact that it isn't could seriously delay registration of transfer or even cause the sale to fall through.

Furthermore, back in the day, the design principle was, more glass more light!  But in this day and age, the energy efficiency regulations recognise that glass is a lousy insulator and the maximum area of glazing is restricted relative to the floor area of the space. It very often happens that something designed and built ten years ago, would not now comply with the current regulations.

With the original approved plan, would have been an engineer design for the concrete deck between the garage below and the structure above. This would have taken into consideration the position of the walls above and been reinforced to take the weight of the structure at that point. But in this case, the walls, and roof structure above are in different places. You would hope that the engineer was advised and his design amended, but there is nothing visible to show that this is so.

This work was done for / by a previous owner. The current owner bought the house like this, but didn't check the approved plans when he bought. However, the current registered owner is held to be responsible for this by the local authority.

To make matters worse, we have to declare that this is an unauthorised, as built structure. The first thing a council planner does is check the aerial view of the site, and it is quite clear that the work we are now submitting plans for is already there. Council, in this case is fully entitled to levy a fine for unauthorised building work, a % of the value of the work ( at current rates ).

The message is. that either building without plans, or winging changes and variations on site, can have dire consequences. When you buy a home, make it a condition that the seller proves that all structures on the site are legally approved, so that, as in this case, it doesn't become your problem and responsibility. This includes boundary walls, pools, thatched gazebo's, covered patios. If it has a roof, or requires a foundation, it needs a plan !
If the pool guy says he will organise the plan, ask for a copy before they start digging the hole.

Last thing, when construction commences you should call the building inspector to check the setting out of the new work. You should also call him on completion to sign off and provide an " occupancy certificate. This states that he has checked and that this is complete as per the plan approved. He may ask to be called at other key points during construction, if that the case he will advise what he needs. Plumbing installation for instance might require an inspection. The inspector, on completion would require certificates of compliance from engineer, electrician, plumber, and in the case of the energy efficiency regulations very probably one from your architectural professional.

I could quote many examples of where unauthorised work has had serious consequences. I had one client, who decided that a nice vacation project - in 30 degree southern hemisphere Christmas conditions, in sandy soil, would be to sink a cellar behind his house. he got some labour in and managed to undermine the foundations of his house causing it to almost fall into the excavation. No plans - no engineer, and not much in the way of common sense !!

Proper plans first, properly designed, by a professional to see that they comply with all requirements practical and technical ! It can save you a fortune in the long run.
Posted by Dave H - The Plan Specialist at 2:07 PM No comments: